Announcing the winners of the 14 (and 4/5)th Caption Contest. Mr. Right has vowed to come back in the saddle for the Caption Contests to resume points for the second season of the CAPHOG. So thank you to everyone who competed, and just as a reminder, here was the image that was chosen for the contest. 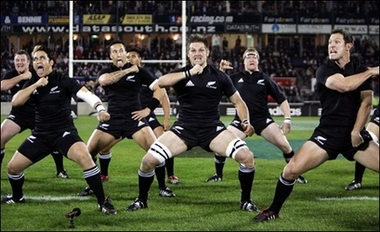 GOP and College says: *To the tune of "Saturday Night"* D-A-V-I-D Hasselhoff, ROCKS!

And now for the awards!

HONORABLE MENTION:
-- Somehow, the dancers doubted the terrorists' version of "YMCA" would make it as a dance craze. – The Random Yak

-- Kos' Kids keep practicing the Nazi salute - and keep failing miserably, just like everything else they try. – hatless in hattiesburg

-- The first all-Democrat rugby team shows solidarity to jihadists at their intial game..."Our team is red hot, your team will be beheaded"! – Beerme

-- Saddam's jury gives a preview of their coming decision, during an afternoon soccer break. – Beerme

#9: Bill knew that, under the circumstances, no one would be able to pin the fart on him. – Pam

#8: The 2006 Democrats finally get around to revealing their new Homeland Security plan. – walrus

#7: In an attempt to protect themselves from Congressional perverts, House pages have started a rigorous work-out program.- Maggie

And the Winner:
...and now you see what really happens to people who don't do well in school. You get stuck on the New Zealand rugby team." – Carl