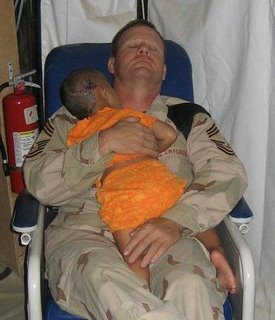 MCCONNELL AIR FORCE BASE, Kan. - All of the attention embarrasses him, but as this Chief Master Sergeant learned recently, a lifetime of caring and good deeds is bound to catch up with you eventually.

Chief Master Sgt. John Gebhardt, superintendent of the 22nd Wing Medical Group here, recently gained worldwide attention for a photo of him holding an injured Iraqi child. The photo was taken about a month ago, while he was deployed to Balad Air Base in Iraq.

The young infant had received extensive gunshot injuries to her head when insurgents attacked her family killing both of her parents and many of her siblings. The chief had a knack for comforting her and they often would catch a cat nap together in a chair.