Announcing the winners of the 14 (3/4)th Right Place Photo Caption Contest of Season 2!

I’m really impressed at the number of entries which this contest brought in! Since I am a non-partisan judge, I’ll omit my entry from the winners, and as a reminder, this is the picture that was chosen. 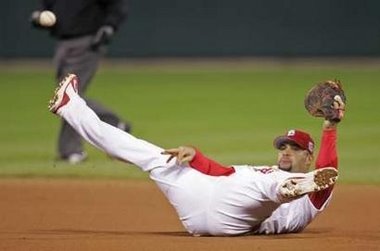 GOP and College said: “Albert says; ‘Kiss my ass, esse!’”
And now let’s get on to the Awards!

-- Pujols awakes from his nap just in time to throw out a Tiger in the 6th inning of game 3 of the world series. Sadly nobody else woke up to notice. – Special Ed

-- Of course, it was Placido who was really the one who was bent over... – Steve O

-- In the final game of the World Series, Pujols reveals the source of the brown substance on Kenny Rogers's hand... – Beerme

-- Unfortunately for Albert the ball was coming in, not going out. – walrus

And now, THE TOP TEN!

#8: I remember this scene for "Saving Ryan's Privates". – walrus

#7: Joe Buck: "Albert Pujols left and right legs were as far apart as Howard Dean and Dick Cheney on that one!" – T.M. Ergin

#6: Albert demonstrates what he learned as a Congressional Page. – Doc

#4: Of course, Cardinals fans never questioned Alberto about the dark smudges on HIS hands like they did Kenny Rogers... – Steve O

#3: "Just put your feet up in the stirrup, if you would please, and I'll start the exam… – GOPAC’s Mom

#2: Albert was a triple threat, being able to catch, slide, and throw gang signs to his homies in one motion. – V the K

#1: Knowing the first base umpire was a "switch hitter", Pujols shamefully tries to influence his call on the close play at first. – Beerme


A round of applause for the contestants, and the winners! Bravo!