To All Who Have Served... Thank You! 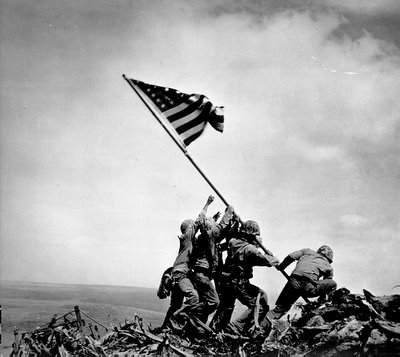 The above photo of the American Flag being raised atop Mt. Suribachi on Iwo Jima, is easily the most recognized war photograph in American History.

Tragically, three of the six men who raised it would never leave that island alive, and a fourth, consumed with survivor's guilt, would drink himself to death at a young age.

You can read more about them HERE.

This Veteran's Day, be certain to take a moment to remember and thank all of those who have served this great country, for without them, their courage, and their sacrifice, we would not be free!

UPDATE: Apparently, Clint Eastwood is currently directing a movie project about the men who raised that flag in the famous photograph. It is based on the book "Flags of Our Fathers" and is being produced by Steven Spielberg. Eastwood is also directing a film to be released around the same time that tells the Iwo Jima story from the Japanese POV as well.

h/t via e-mail to THIRDWAVEDAVE, who has collected a number of links to blogger tributes to our nation's veterans on this special day.
Posted by Mr. Right at 11/11/2005 12:46:00 PM