Announcing the winners of the seventeenth ever Right Place Photo Caption Contest!

Presenting the top fifteen captions for this picture from REUTERS/Will Burgess via Yahoo!

That's right, over a dozen eggs'ellent entrees! I'm sorry, I can't help but tell some corny yolks, after all, it is Fryday! Seriously though, there were a lot of good entries this week, I had a hard time paring it down, so this week we have our biggest winner's pool to date! 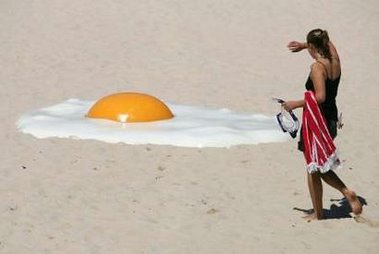 #15 (tie): Godzilla is going to be pissed when he finds out!


#14: AP BREAKING: In news today, Michael Moore burst open, proving, as thought, that he was a no-brained, single-celled organism.


#12: The proper authorities were scrambled to the scene.


#11: Once again, Trillian's vacation is ruined by an instability in the Heart of Gold's Infinite Improbability Drive.


#9: After ordering a "Sex on the Beach" during her vacation in Cancun, Jamie realized that she might have a little problem with the language barrier.


#6: If you think that's bad, you should've seen what happened when God spilled his breakfast on Mecca when he was having sausage and bacon!


#3: Returning to the site where they had discovered the pteranodon egg, paleontologists were horrified to find that their guide, Cindy Lou, had decided to surprise them with a big breakfast.


#1: What's that yolk doing here? I thought this beach was 'Whites Only.'

Oh, Thank Heaven for 7/11 Edition
Fickle Finger of Fate Edition
Things Are Looking Up Edition
Rage in the Cage Edition
Not So Mellow Fellow in Yellow Edition
The Beards and the Beads Edition
Weapons of Mash Destruction Edition
You're Al I Ever Wanted Edition
His Cup Runneth Over Edition
The Eyes Have It Edition
Jeepers Veepers Edition
Huggermugger Edition
Ear's to You Edition
Heavy Medal Edition
Village of the Damned Edition
White on Rice Edition