Announcing the winners of the sixteenth ever Right Place Photo Caption Contest!

I knew we were going to step through the Stargate SG-1 wormhole this week, I just didn't realize quite how often...

Presenting the top twelve captions for this picture from Mikhail Metzel at AP, that was "enhanced" by USA Today.

#12: At that point the rice reached the boiling point.


#8: Moments later, the Condi-bot went on a rampage that killed dozens of Westworld tourists.


#7: "Dr. Evil" W. Bush: "I always wanted a Secretary of State with frickin' laser beams coming from her eyes."


#6: "Perhaps you didn't hear me the first time... you WILL provide more money for Iraq!"


#5: Oh, no! The PhotoShopped version of Condi has escaped the lab....it's heading for the New York Times building!


#3: It became quite obvious to all attending the Senate hearing that Sec. of State Rice was not amused by the last question from Senator Kennedy.


#2: "This is General Hammond. I don't care if the President is asleep, wake him up! Colonel O'Neill and SG-1 have found out that Condi is really a Goa'uld."


#1: De Beers' "Make Her Eyes Light Up This Christmas... with the Gift of Diamonds" campaign only succeeded in scaring the crap out of people.


BONUS! We hereby present yet another photoshop award to Chris for his visual take on this week's most popular theme... 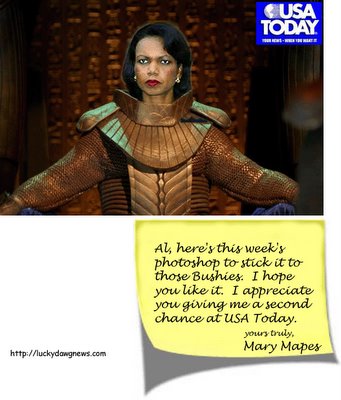 Be certain to check out the remaining piece of Chris' "trifecta," a mini-movie! [Requires Windows Media Player.]


Want even more Condi photoshop fun? Rodney Dill lent his talents to Buckley F. Williams at The Nose on Your Face with this!
[All together now... Eeeeeeewwwwww!]

Captions Outrageous! [Sunny Side Up Edition]

Oh, Thank Heaven for 7/11 Edition
Fickle Finger of Fate Edition
Things Are Looking Up Edition
Rage in the Cage Edition
Not So Mellow Fellow in Yellow Edition
The Beards and the Beads Edition
Weapons of Mash Destruction Edition
You're Al I Ever Wanted Edition
His Cup Runneth Over Edition
The Eyes Have It Edition
Jeepers Veepers Edition
Huggermugger Edition
Ear's to You Edition
Heavy Medal Edition
Village of the Damned Edition