Announcing the winners of the eighteenth ever Right Place Photo Caption Contest!

Presenting the top ten captions for this picture from Gary Hershorn/File/Reuters via Yahoo! 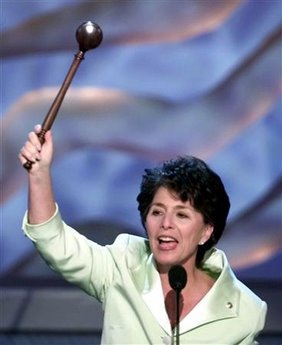 #10: "Hey, George! Come on over and bring your friend Karl! I've got a surprise for yoooooouuuu...."


#9: And just think... properly inserted, it will give Democrats a spine!


#8: Babs Boxer displays a souvenir from her early days as a knee-capper for the Oakland Crips.


#7: Sen. Boxer rings the dinner gong and then moves to a safe position as not to get in the path of "Hungry Teddy."


#6: "I've painted Karl Rove's head like a watermelon, Gallagher. Now come up here and get your hammer!"


#3: "I will wield mighty Mjollnir to crush Jormungand's head at the final battle, Ragnorak... or use it to bring order to the Senate... Frankly, the former is probably more realistic."


#2: "How much am I bid for this priceless artifact --- the actual Ugly Stick Barbara Mikulski was beaten with!"


BONUS: Chris from Lucky Dawg News has produced a photoshop entry for this week's contest. While very clever, as usual, it might be considered a wee bit too much for some of our more sensitive readers. It has to do with the subject of partial-birth abortion. With that in mind, those wishing to view it can find it HERE.

Oh, Thank Heaven for 7/11 Edition
Fickle Finger of Fate Edition
Things Are Looking Up Edition
Rage in the Cage Edition
Not So Mellow Fellow in Yellow Edition
The Beards and the Beads Edition
Weapons of Mash Destruction Edition
You're Al I Ever Wanted Edition
His Cup Runneth Over Edition
The Eyes Have It Edition
Jeepers Veepers Edition
Huggermugger Edition
Ear's to You Edition
Heavy Medal Edition
Village of the Damned Edition
White on Rice Edition
Sunny Side Up Edition

And, in case you haven't yet seen it, here are the overall rankings for the first 15 caption contests!!!