We Must Protect the Children 1.0 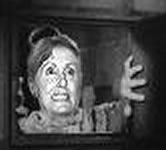 Teenagers† were targeted by a sleazy Republican Congressman. They received inappropriate emails and "instant messages". This is despicible.

{There. I said it. Okay now? They're still teenagers until the day they turn 20 dammit.}

‡NOTE: This blog in no way endorses the behavior of that particular congressman or any public figure who engages in similar behavior.†
Posted by Frau Blücher at 10/31/2006 04:11:00 PM