Captions Outrageous! Winners [I Don't Want to Set the World on Fire Edition]

The first CAPHOG standings update for Season Two will be posted soon!

Presenting the top 40+ captions for this picture from El Marco via Flickr. 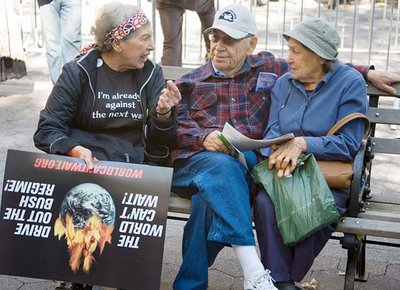 -- "...And George Bush gave me that 'furniture disease', too! You know, the one where your chest falls into your drawers?"

-- MAN THINKING: "This old bat is so full of it, she should wear Depends on her head!"

-- "Don't you recognize her, Henry? That's our granddaughter, the one that used to be the Grateful Dead groupie."

-- WOMAN ON LEFT: "You're a sellout! You sold out then, you're selling out now!"
WOMAN ON RIGHT: "You didn't bathe then, you haven't bathed now!"


-- "The world can't wait for Bush to leave, and God knows that I only have a few years left myself."


-- "I'm gonna head down to the soup kitchen and see if they found my teeth yet."


-- "Pfffft! In my day, you didn't have war. Times were tough enough without it! Why, kids walked seventeen miles to school, uphill both ways in the snow, and woke up an hour before they went to sleep!"


-- "How would our fellow hippies feel if they knew we were going to go back to the loft, put on SS uniforms, and whip each other?"

-- "Oh, I don't have anything specifically against homosexuals, but that Fred Phelps is so darned sexy!"


-- The "Protest Babe" factor at the recent anti-Bush rallies was sorely lacking.

-- "I was this close to marrying Jerry Garcia."

#20: "Woodstock? Altamont? Protesting? Hell lady, we're just in from Des Moines to see the Statue of Liberty and the Rockettes."


#17: "Have you considered the benefits of joining AARM, the American Association of Retired Moonbats?"


#16: "Woodstock was all right, but the hash at Altamont was mind-blowing."


#15: "...So anyway, I was wasted on the peyote, and Betty Grable was starting to melt into Wendell Wilkie. Then, the trip got really strange..."


#9: "At the last protest I went to, they handed out free LSD and heroin. Now they're handing out free fiber wafers and prune juice."


#8: "You know, Grover Cleveland would have never lead us into a unprovoked war."


#4: "...And when I'm driving on the Interstate at 35 miles per hour, you can be damn sure it's the left turn signal that's locked in the on position!"


#3: Aging due to the stresses of BDS is dramatic: It's hard to believe that this protester is merely 35 years old!


#2: "Of course Global Warming is real! And if any of these young punks had been alive during the last Ice Age, they'd know it."

ONGOING:
Captions Outrageous! [The Scion, the Witch and the Saprobe Edition]

Ear's to You Edition