Captions Outrageous! Winners [The Scion, the Witch and the Saprobe Edition]

Presenting the top 20+ captions for this picture from REUTERS/Shannon Stapleton via Yahoo! 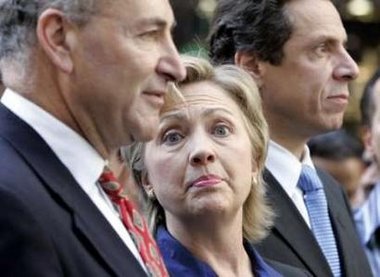 "Where will you be when your laxative starts working?"

-- Hillary tries to avoid throwing up at the notion that Chuck is the senior Senator from New York.


-- That is exactly the face you'd expect someone to make when sandwiched between a Schumer and a Cuomo.

-- Hillary continues her campaign strategy of looking to the right while standing to the left of Chuck Schumer.


-- "...And then, he's making this face and blubbering in that dumb cracker accent 'Ah didn't know it counted as sex.' So, I kicked him in the groin until I felt better."


-- HILLARY: "How come I have to hold the bag of illegal campaign contributions?"
CHUCK: "You carry the bagmoney because you're the JUNIOR Senator. Now quit pouting and suck it up, we gotta make it through security."

-- Hillary's sixth sense seemed to warn her of the approaching danger of Helen Thomas.

-- Looks like someone forgot to hit the little girls room before Ted Kennedy started his speech.

-- Wanna make yourself look smart? Hang around with stupid people!

-- Unfortunately, Hillary's lack of cooperation with Cindy Sheehan forced the Democrats to frog march her out of the party.


#9: Hillary evaluates some candidates for the title of "Co-President."


#8: Hillary Clinton, not unnaturally, mistakes Chuck Schumer for a cuspidor.


#6: CHUCK: "Sorry, Hillary, I don't know the Heimlich Maneuver either."


#5: Hillary suddenly realizes she's much shorter without the broom.


#4: "How did I get rid of Mark Warner? Let's just say a few hits of ecstasy, a sheep, and a hidden camera can do wonders for a politician's thought processes."


#3: Hillary turned in stunned amazement and saw what she thought she never would: Chuck Schumer with his mouth shut!


#2: "Okay, Chuck, there's four old ladies, a pack of handicapped Cub Scouts, and eight pregnant women between you and the TV camera. How many can you knock over?"