I would like to send out my thanks to all of the contestants, who made this one of the best contests I’ve created. 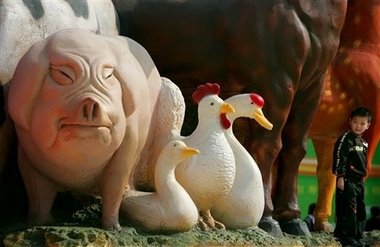 Since I was judging, I will exclude myself from the top ranks, but I said, “Look! It's Chung Thumb!”

And now here are the Top 15 entries, as I saw fit to judge.

-- Is it racist for the Chinese to make a pig look Chinese?
Cowboy Blob

-- Civil Rights groups protested the segregation of the white meats from the others, but nobody cared.
Greg

And now for the TOP TEN!

#10: Surrounded by giant barnyard animals, little Seung Pak was glad he had that insurance that pays for you when you can't work....Aflac! What's it called...Aflac! It covers expenses and pays your wages when you're hurt...Aflac! He just couldn't remember the name of it...
Beerme

#9: Riots follow in Denmark as Muhammed is shown having Asian features.
Steve O

#8: Little Tae Kwan Park was disappointed to learn that you had to be at least as tall as a pig's weenie to go on the new Space Mountain ride at Disney North Korea.
Walrus

#7: In the remake of Animal Farm, Bill Clinton is the voice of Napoleon. "All sexual indiscretions are equal, but some are more equal than others."
Doc

#6: Hey did someone finally get the focus right on that Hillary Clinton picture from the previous photo caption contest?
Walrus

#5: This is how the Main Stream Media see the world: the Republicans are the horses, but are not covered. The Democrats are truly the chickens, ducks, foul, and swine, but are portrayed in the media as the stars.
Doc

#2: Hey didn't that pig drive a car off a bridge once?
Special Ed

And the winning entry:

#1: It's just like Congress! Whatever isn't pork is just plain fowl.
Greg